Poetry.  Love.  February.  Valentine’s Day.  Teenagers. An interesting mix, wouldn’t you say? If you teach high school students in February, all of these collide right around the middle of the month. Most students I teach know all about the holiday, but some are (recently) single, indifferent, hurting, or even jaded, so mushy love poems are not for them. The five poems that I’ve collected here for you include the inevitable theme of love, but they also contain other concepts that make the poems agreeable to most teens. What you’ll find below is a poem that is, essentially, the equivalent of a love word puzzle, ([“love is more thicker than forget”] by E. E. Cummigs), a brief poem that addresses the risks and results that failed love brings (“Poem” by Jill Alexander Essbaum), a poem inspired by a peaceful war protest (“This Year’s Valentine” by Philip Appleman), a poem that muses over not remembering when a couple first met (“Monna Innominata” [“I wish I could remember”] by Christina Rossetti), and a poem based on missed opportunity and regret (“February 14” by Ronald Wallace). Do you see what I mean? These poems are perfect for teens! Also, you have my word on this: they are completely appropriate with NO swearing, questionable words, or sexual innuendos. Win! 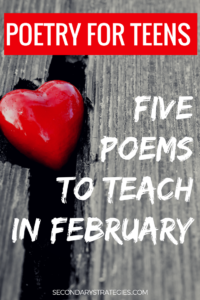 [“love is more thicker than forget”]

This is an ideal poem if you would like to have a discussion about a poem where there are no set answers, where students can share what they believe the poem’s words and tone are attempting to convey without risk of not getting it right. Though this poem is composed with simple words – there are no words to define before reading – students will need to take some time while reading to weigh each comparison against the next. It is a fun poem not only to figure out, but also to debate and discuss: is love really more or less, bigger or thinner, most or always what Cummings says it is?

I suggest that you approach the poem as a whole, instructing students to do their best to make sense of the comparisons that they will read, but not expecting that every line will make perfect sense. They should not be disappointed or frustrated if they are confused in parts or if they understand what is going on but can’t find the words to explain themselves. I have asked students to annotate the poem with the tone each stanza conveys, with an explanation or two of the comparisons they connected with the most, or the emotions they feel as they are reading. I have never asked students to explicate the poem line-by-line since many of the lines are just too difficult for my juniors to put into words. I often share that the poem is very much like love itself: seemingly simple to comprehend, but challenging to put accurately into words. Love is often inconsistent and shifting and dependent upon a multitude of factors in every situation. Cummings may have intended for the complications provided by the language and tone of the poem to be reflective of how love actually is: positive and “sunly” one moment and negative and “moonly” the next.

Here’s some information that will help you discuss each stanza:

Question: Does the inclusion of invented words “unbe”, “moonly”, and “sunly” add to or detract from the poem’s message?  What about the ungrammatical constructrions “more thicker” and “less littler”?

Creative writing: Write your own stanza about love, mirroring one of the four stanzas in the poem.

This poem’s four short stanzas reflect the pain that failed love causes a heart to endure and shows that when it is just too much, it is simply unwilling to open up and try again.

The first two stanzas are each metaphors, describing situations in which something is just not right. You may need to define the words “inclement” and “stoic” for your students. (Note the play on words: clementine, inclement, climate.) The third and fourth stanzas employ a simile: Just like an oyster that protects (cloisters) its valuable pearl (spoil, noun), the heart that has reached its limit, closes itself off from anyone who tries to claim its prized possession.

I LOVE, LOVE, LOVE teaching this poem! Students, despite their shock at its contents, respond positively to it, and I love being able to show them that poetry can influence political and social movements and is more than mere entertainment. Written in 2003 as American forces prepared to invade Iraq, poets wrote poems to protest. The result was a website inundated with 13,000 contributions from around the world. This Year’s Valentine incorporates vivid imagery, contrasts in imagery and sentiment, and a turn in most of its stanzas. Philip Appleman and his poem “This Year’s Valentine” supported not only the resistance movement but the poem also neatly fit a major theme of the month of the buildup: Valentine’s Day. This poem, despite its alarming content, is a joy to teach since students find the description and stark contrasts surprising and refreshing, and, as one of my teen students put it, “Not that typical overly mushy love stuff that makes me want to gag.” Additionally, the poem allows you to show students that creative voices have the capability to produce unity among those who support a common cause and that those combined voices can, perhaps, effect change.

If you would like a complete lesson with close reading questions, a constructed response, and an objective summary, click this link to go to this resource on Teacherspayteachers.com where you can check it out.

“Monna Innominata” [“I wish I could remember”]

This sweet sonnet is all about the speaker attempting to remember when the speaker and his or her love first met. The poem is written in iambic pentameter with an ABBA; ABBA. CDCD; DC rhyme scheme. I suggest having students write about the time they first met their (best) friend, or their current boy or girl friend. Some will say they can’t recall, which is kind of perfect as a lead in to the poem. (In that case, have them write about the first time they met anyone of any consequence in their lives. If that doesn’t do the trick, ask them to describe meeting you for the first time!)

So, this is a poem of contrasts, in which time provides two ways of looking at a missed opportunity or situation that never occurred – one shiny and joyous while the other is gray and damaged. It is a short poem that is ideal for teaching tone, starting with the title – February 14, not Valentine’s Day. In this case, the day is a day on the calendar, not necessarily the day devoted to romantic love. The first stanza entertains many years of love celebrated one Valentine’s Day after another, the result of receiving a kiss as a teen. The second stanza begins with the turn “Or” and shows the opposite: ten years with only an unsent letter, a Valentine perhaps, its dinged envelope and smudged writing reflective of a different sort of life. This type of poem, with both the positive and the negative in opposition, is easily understood by teens whose emotions are as changeable and as up and down as those expressed in the poem. 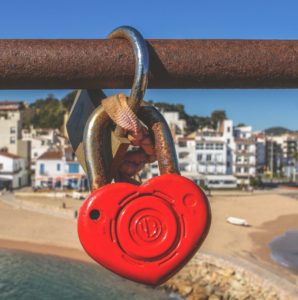 After you’ve tried one or more of these poems, won’t you let me know how it goes for you? If you have any additional helpful teaching hints, please leave them below for anyone else who wants to share some poetry with their teen students in February (or anytime!) 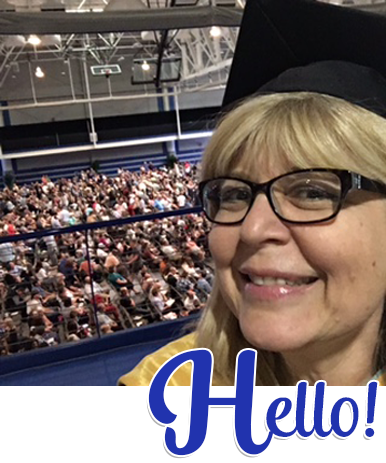 Of Mice and Men Interactive Notebook:
"This was absolutely the best thing I used all year! I used this product with my resource Language Arts class. These are students who are in high school, but are reading at the fifth grade level. I am still required to teach them "Of Mice and Men." As a result of using this interactive notebook, my special education kids knew this book like the back of their hands! Thank you, thank you, thank you!!!"
Maggie C

"This made teaching OM&M in my ISNs so easy. I used every part of the unit. Thanks so much for the doing the work for me. Great resource."
Michael P.

"Students loved this. It was a great way to get to know them and assess their writing at the same time."
Catherine T.

"My student's loved the student selfie! What a fun activity and I love that I was able to edit it! Thank you!"
Anna H. 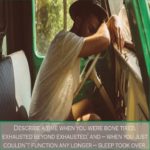 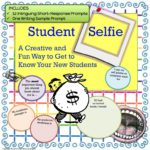 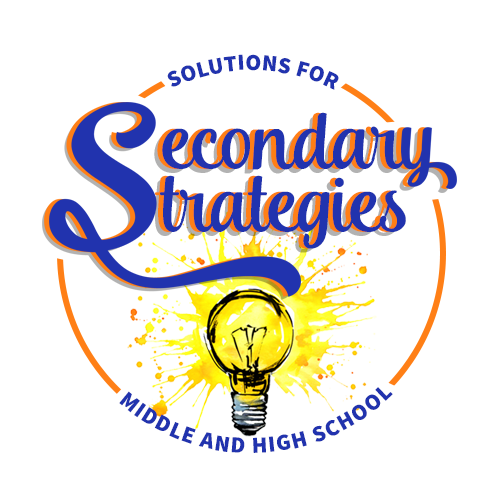